Earlier this year I entered the NYC Midnight 100-word Microfiction Challenge, an international creative writing competition that challenges participants to write original 100-word stories by giving them a specific genre, action and word assignment, in 24 hours. Every writer is placed in a specific group based on the genre, action and word assignment they are given. The competition judges pick 15 authors (per group) to progress to a second round. I was assigned to write a story under the suspense and/or thriller genre, and had to include the action of sprinting and the word ‘beyond’.

Last week, the results of the first round were released. I didn’t make it to the second round, but my story got an honourable mention. To get an honourable mention in an international writing competition in which 6,932 people worldwide participated in, for a story I wrote in 24 hours, in a genre that I have not only never written under but have actively avoided writing under, feels absolutely amazing!

My short story can be found below.

It took me two days to break free. The rough, thick ropes delicately slipped off my limbs once I untied the weak knot.

I sprinted out of the old shed, down the highway, with no plan. I eventually managed to find a man driving a Ute to give me a lift, after flirting with him a little.

I left enough blood to make him think the job was done, he’ll eventually figure out it’s not mine.

Why Nicholas couldn’t just divorce me or at least kill me himself is beyond me. He should have at least hired a smarter hitman. 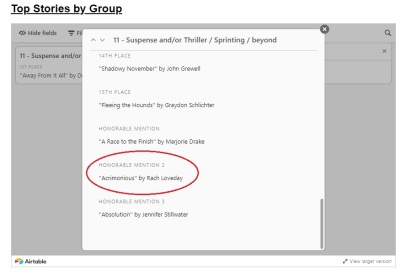 WHAT THE JUDGES LIKED ABOUT YOUR STORY – {2116}  I love the self-assuredness of the narrator’s voice! She speaks very measuredly about the tactics she uses to escape, as if she has thought objectively about her plan (even though she says she has “no plan”). It gives the story a little distance, which helps us get details that a more emotionally involved narrator might be too compromised to give us, such as how much blood is enough, and the weakness of the knot.   {1751}  I liked that this woman had such a sense of humor about her and such a tough-minded attitude. I really fall in love with tough women, ones that can flirt their way into a Ute, for example. Great job.  {1909}  I enjoyed how active and empowered this main character was. The pace was also fast and thrilling.

WHAT THE JUDGES FEEL NEEDS WORK – {2116}  One moment where I wanted more detail was: “after flirting with him a little.” If we could see her body language, see his facial expression, or hear some of their dialogue, this scene would come to life more.   {1751}  I wondered at the word ‘delicately’. I mean, they have been tied up for two days, I’m not sure delicately is a word that I’d use for that situation.  {1909}  The final line of this story felt a bit out of place to me. I would recommend introducing Nicholas earlier in the story.

“Acrimonious” was inspired by the 2014 film, Gone Girl (based on the 2012 novel of the same name). When I say it was inspired by Gone Girl, my intention was not to create a carbon copy or similar story to Gone Girl, rather I was inspired by the writing of the novel and the film, specifically the use of an unreliable narrator to make readers/viewers question who is really guilty or rather the greater evil out of the two characters.

The main reason why I don’t write suspense and/or thriller stories is due to the fact that I generally don’t read or view a lot of suspense and/or thriller books and films respectively. For me to enjoy stories under this genre, they have to be compelling. I’ve always loved stories (no matter what medium) under this genre that make you question what character to root for, and how innocent or guilty they really are. This is also the main reason why I enjoy fictional crime shows like Law & Order and NCIS.

In the case of my story, a husband has hired a hitman to kill his wife, but his wife has managed to break free. However I also make it clear, specifically towards the end, that while her husband’s actions are extreme and abhorrent, she’s not an innocent person either. Both parties in this story are responsible for their marriage breakdown, but who is the greater contributor or evil party remains to be seen.

My story isn’t written with a beginning, middle or end, rather it’s the start of a longer story (whether I’ll eventually complete this story remains to be seen). If this story was a movie, it’s one scene, perhaps even the opening scene, rather than the whole movie. Based on the judge’s feedback, this would be the story’s biggest weakness, which I feel was a fair assessment as I struggled to write the ending.

Overall, I greatly enjoyed participating in this competition and hope to do so again next year.

All images via Google Images and Pixabay, unless stated otherwise.